I wanted to let you know that I’m continuing to get excellent feedback on Sterling’s show on June 30th.

·  They should have played all night!
·  Why couldn’t I buy a Sterling t-shirt?
·  Can they come back next year?
·  April Wine should have opened for them!! 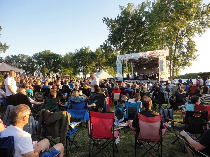 No Lady Gaga to be found here :), but these guys are really talented and Rocks the stage opening for Acts such as Harlequin and April Wine speaks for itself, Lead guitarist to Bass and Drums flawless and 3 vocalists gives much dimension to the band, I would Pay to see this act alone.
My review for June 30 concert is Sure April Wine is a big name and i waited 34 years to see them again and they did not disappoint, but to my surprise, here comes this band that i never seen or heard (maybe i don't get out much) but ever since practice they captivated me right to the end and they equaled the main act of the night for entertaining. 5 Stars in my Books for Sterling!  -Simon Quesnel

My wife hired the band “Sterling” for my surprise 50th birthday party, which was held at the Golf Country Club we are members to. Sterling was fabulous.  My wife had provided them with a list of my favourite tunes from the 70s rock era, and they gladly added those to their already extensive repertoire.  They played splendidly and all the guests commented on the quality of the music.  We rocked and danced all night.  Sterling really made it a memorable occasion and we will certainly hire them again in the near future. -Sicotte Guilbault LLP 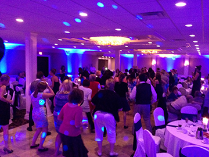 I really wanted to take a few moments to send this email and say “Thanks so Much” for a night to remember. The band was fantastic and to say the feedback was incredibly positive would be a huge understatement. The volume was perfect and the songs the band played was a fantastic mix. The level of professionalism before, during and after is 2nd to none. My husband said this was the best surprise party ever, and a 50th he will NEVER forget. You will certainly be hearing from us again and we will spread the word about STERLING without hesitation. The investment was sooo worth it. Thanks again for everything. -Karen H.

Recently I had the pleasure of seeing the rock 'n' roll band Sterling for the second time. By the time this band has taken a song, tweaked it and added their Sterling twist, the song is far from your everyday cover tune. What I like about this band is the fact they do not try to sound like the original artist; they play songs their own way.
As it turns out, the band members live all the way from Chesterville to Navan, Ontario (home of frontman Michael James). The bands musical background and influences carry a wide range from Blues to Rock. I think this level of diversity is what allows Sterling to produce a uniquely diverse rock sound. After I had first seen them showcasing their talent with the likes of Trooper and Harlequin during the Navan for of 2010, the band continues to deliver a most entertaining rock show. During discussions with some of the spectators about the band, one of the comments which really stuck was, "I feel like I was a part of Sterling show..."
Sterling often takes an alternative approach to music by blending songs together, modernizing instrumental tone and filling their stage performances with explosive energy. In one of the band's more popular songs, they alternate between a Pink Floyd and an Aerosmith song to form one unique song. -Navan Nugget

Once again, it was a super successful party ! How cool is it to have a full up band at your party ?!? ... SUPER COOL !!  It simply would not have been the same without your awesome band!! Thanks so much to you Mike and to the entire Sterling band and crew for entertaining us all night and keeping the party alive, dancing and rocking ! So many people commented how awesome you guys sounded. Please  pass our sincere gratitude on to the rest of the band! You guys were great !
Thanks again so much , you guys totally rocked !!! -The Renwick Family 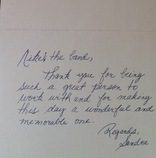 Thank you for being such a great person to work with and for making this day a wondering and memorable one. Regards,

Michael James, frontman of Sterling is a Traynor Listed Artist.